I was sitting here like a zombie, trying to do a little work from home, when I found myself opening up a blog and spilling my thoughts onto the page.

It feels like weeks ago, but only a day and a half ago, I lost my Opa (grandfather). The thing that makes this loss different from anything other is nothing but the fact that he was (funny isn’t it? was because he isn’t anymore) an extraordinary man.

Opa Karl died at 104 years old in Wellington hospital on Saturday the 29th of April 2017, only two hours after I had just seen him for our morning coffee. You see, he had been admitted into hospital a couple of weeks before hand, around Easter. The reason myself and my family would go in daily was of course to see him, but because he spoke no English, so we needed to translate for him, something I had been doing for years. I remember I was around seven going for a bike ride down to the dairy with Opa Karl and a man asked him about his bike (it was an old thing) and there I was juggling German and English, something he always brought up and smiled about.

Growing up I had an Oma, who was married to Opa and then I also had my Opa Karl. He was a family friend of my grandparents, who came to New Zealand annually for a visit (apparently 4-6 months at a time) and eventually, decided to move here for good. I always find it bewildering that I have known Opa Karl my entire life, yet he has only… had, he had only known me for a a quarter of his.

Opa Karl was born in 1913, so he fought for Germany in World War II. If you would like to know more about his part of his life, let me know and I can share this with you later. He never really spoke about the serious parts with me much, but I he told me lots of stories on the comradery and how he would always swap his cigarettes for nicer food – he never smoked a day in his life.

I am finding it hard to write about someone who, to be quite frank, I thought would live forever. Being a third grandparent and watching me grow up, being here this long; I assumed he would be here to witness my wedding or meet my children as Uhr Opa Karl/Great Grandad Karl. To be honest with you, I’m not really sure why I’m writing this at all. I guess it is somewhat cathartic? And I suppose the thought of 104 years of life now being only memories, makes me a little upset.

I learnt so many things from Opa Karl, as I did from all three of my grandparents, but the most valuable but would have to be his quality of life. Up until his late nineties he was extremely fit and healthy. I have memories as a young kid practising hand stands and having him join in! (He would have been in his seventies!) – to my late teens in Rarotonga for his 95th birthday, going for a morning jog up the beach!

He said his trick was that he would do his excersizes ever morning with out fail, starting with the bike movement first thing in bed (you know the one that kills your abs!) He said it was gesund/healthy to always remain gelenkig/not quite sure how you translate that, but I like to think of it as always active.

Gesund was probably one of the most used words in Opa Karl’s vocabulary, especially when preaching about food. Growing up, I was always told to eat my vegetables: spinach, cauliflower and the like. The quote “do as i say not as i do” comes to mind. Funnily enough it wasn’t until my late teens, I discovered that he despised vegetables! So much so that even when my mum made Auflauf, sort of like a cheesey potatoe bake, she would have to make a separate dish, especially for him that excluded cauliflower! Man, did you know by a look of utter disgust if you placed a meal in front of him that he didn’t like the look of. Generally, upon tasting, the look would sometimes wilter – if you were lucky.

Another group of Opa Karl’s famous words were “Wie kan Das anegehn!”/how is that possible. A remark commonly used when hearing about someone’s odd behaviour or how one of the house hold pets would do something funny. He never dwelled on anything for too long though, I guess after a decade of loss and things like technology, adapting to change was something that simply happened for him. I remember having a chat with him rather upset about the suicide of two of my closest friends, where he blunty  (but not horribly) told me I shouldn’t be sad too long and that I basically had to move on. That conversation is something I have often thought about, how someone who went through a world War, hearing about people taking their own lives might consider the concept.

Opa Karl lived by looking forward to things. And when he got to a point where he was no longer looking forward to what he could do; it was for what we could do that he would be around for: travelling, graduating, finding careers etc. He found so much joy in everything we achieved. Seeing people happy made him happy and for Opa Karl, that was enough. Every time I’d ask Opa Karl if he needed anything from simply going to the shop or what he wanted to Christmas, he would always say “ich habe alles”/I have everything. 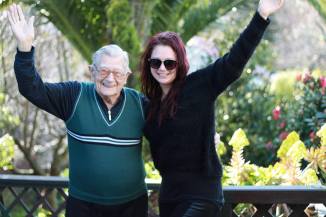 So if there is anything I will keep, from knowing Opa Karl, it will be to cherish people and moments – not things. To remember that life really isn’t that short – so don’t sweat the small stuff and, more importantly; if you don’t want to eat your vegetables, then for God’s sake, don’t eat them – just tell your grandkids that they should.

In loving memory of Opa Karl, may you be happily sitting with all your old friends, at a big table, telling stories of a life of nothing but laughter, love and of a life damn well lived.